1,000 BOOKS TO READ BEFORE YOU DIE: A LIFE-CHANGING LIST

"Every so often, a reference book appears that changes the landscape of its area of focus. In the case of reading and readers' advisory, this is one such book. The lively, witty, insightful prose covers 1,000 titles across all fields of literature, from fiction to philosophy, nature to technology." -- Booklist

THE BOOKS OF EARTHSEA: THE COMPLETE ILLUSTRATED EDITION 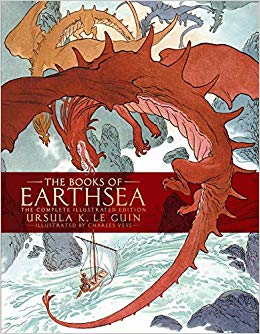 Celebrating the 50th anniversary of the timeless and beloved A Wizard of Earthsea, for the first time, this beautiful omnibus edition of the entire Earthsea chronicles, includes over fifty illustrations illuminating Le Guin's vision of her classic saga.

"Le Guin's stories never disappoint, and this epic fantasy is no exception. Decades before Harry Potter, the author created , a brash farm boy who goes to a wizard school in The Wizard of Earthsea." --Library Journal

HISTORY AS THEY SAW IT: ICONIC MOMENTS FROM THE PAST IN COLOR

This revolutionary photography collection is as close to time travel as it gets. Featuring 120 historic black-and-white photographs thoroughly restored and rendered in color, this book illuminates some of the most iconic moments in history, from the sinking of the Titanic to the construction of the Golden Gate Bridge.

Celebrating 50 years since Led Zeppelin formed, this is the first and only official illustrated book ever to be produced in full collaboration with the members of the band. A definitive 400-page volume charts the group's unparalleled musical career with over 300 photographs--many seen here for the first time--from photographers around the world, and photographs from the band members' personal collections. Accompanying the photographs is rare and unseen artwork from the Led Zeppelin archives, and fascinating documents and images from the Atlantic Records vaults.

This is the ultimate world atlas for globetrotters. Combining their extensive mapping experience and unrivalled destination insight and knowledge, the first dedicated altas makes it easy for you to plan adventures and discover remarkable places around the planet. Inside, you'll find detailed maps to every country on Earth, with popular regions and destinations presented at greater scale.

This richly illustrated book explores the huge creative endeavour behind Tolkien's enduring popularity. Lavishly illustrated with over 300 images of his manuscripts, drawings, maps and letters, the book traces the creative process behind his most famous literary works. This exquisitely produced catalogue draws together the worlds of J.R.R. Tolkien - scholarly, literary, creative and domestic - offering a rich and detailed understanding and appreciation of this extraordinary author.

Leibovitz looks back at her career and the images that helped propel her to photographic superstardom in this captivating photo anthology. The bulk of the book focuses on Leibovitz's most famous images, such as of Nixon's resignation, the Apollo 17 shuttle launch, John Lennon and Yoko Ono, and the Bush administration in the Cabinet Room of the White House. In essays that accompany each photo series, Leibovitz explains the history and circumstances behind each image. This fascinating work will appeal to photography historians and casual observers alike.

Los Angeles photographer Marvin Rand created iconic images of some of the most celebrated architectural creations of his time, photographing buildings by the likes of Modernist masters Craig Ellwood, Louis Kahn, and Frank Lloyd Wright to capture the essence of their work - and, in doing so, played a critical role in shaping the Mid-Century California style now worshiped the world over.

Carleton Watkins may not be a name known to contemporary artists and art critics, but his exceptional photographs of the American West, taken during the mid- to late-1800s, "did more to make the West a part of the United States" than any single American, writes critic/historian Tyler Green. This extensive biography of Watkins, complete with a wealth of black-and-white reproductions of his photographs, had to be painstakingly constructed from a wide variety of sources, since Watkins's own documentation was destroyed in the 1906 San Francisco earthquake.

ARTFUL DESIGN: TECHNOLOGY IN SEARCH OF THE SUBLIME, A MUSICOMIC MANIFESTO

What we make, makes us. This is the central tenet of Artful Design, a photorealistic comic book that examines the nature, purpose, and meaning of design. A call to action and a meditation on art, authenticity, and social connection in a world disrupted by technological change, this book articulates a fundamental principle for design: that we should design not just from practical needs but from the values that underlie those needs.

A must-have for anyone interested in these two beloved West Coast artists, best known for their geometric abstractions of the California landscape. Featuring the pairings of more than 50 paintings, this book shows the connection of these two artists like never before. Richard Diebenkorn and Wayne Thiebaud were close friends; they shared the inspiration of California and experimented with perspective to capture their surroundings.

Magical spaces rich in history, the missions of California, featured here in all-new photography, invite reverie and hint of romance. The twenty-one missions of California, from San Diego to San Francisco Solano, are historic treasures and sites of pilgrimage for visitors from the world over. Intrinsically beautiful structures typically built of adobe brick and wood, adorned with towers, domes, whitewashed stucco, often surrounded by lush gardens, the missions are at the very heart of California.

Renegade photographer Philip Volkers travels the world with his camera, achieving total immersion in both modern and ancient festivals. His passion is the documentation of spiritual, hedonistic gatherings, and exploring the meaning behind them with his work. Dust to Dawn documents the visual adventures of Volkers at Nevada's notorious festival, Burning Man.

HOW TO BE A GOOD CREATURE: A MEMOIR IN THIRTEEN ANIMALS

National Book Award finalist Sy Montgomery reflects on the personalities and quirks of 13 animals--her friends--who have profoundly affected her in this stunning, poetic, and life-affirming memoir. This restorative memoir reflects on the personalities and quirks of thirteen animals--Sy's friends--and the truths revealed by their grace. It also explores vast themes: the otherness and sameness of people and animals; the various ways we learn to love and become empathetic; how we find our passion; how we create our families; coping with loss and despair; gratitude; forgiveness; and most of all, how to be a good creature in the world.

I TOO SING AMERICA: THE HARLEM RENAISSANCE AT 100

The exhibition celebrates the 100th anniversary of the Harlem Renaissance, a period of cultural blossoming that occurred in the New York City neighborhood of Harlem in the 1920-50s. It illuminates multiple facets of the era--the lives of its people, the art, the literature, the music, and the social history--through paintings, prints, photography, sculpture, and contemporary documents and ephemera. The project is the culmination of decades of reflection, research, and scholarship by Wil Haygood, acclaimed biographer and preeminent historian on Harlem and its cultural roots.

JOURNEYS OF A LIFETIME: 500 OF THE WORLD'S GREATEST TRIPS

Compiled from the favorite trips of National Geographic's legendary travel writers, this fully updated, 10th anniversary edition of Journeys of a Lifetime spans the globe to highlight the best of the world's most celebrated and lesser-known sojourns. Offering a diverse array of possibilities, every continent and possible form of transport is covered, illustrated with glorious color photographs.

Mending Matters explores sewing on two levels: First, it includes more than 20 hands-on projects that showcase current trends in visible mending that are edgy, modern, and bold--but draw on traditional stitching. It does all this through just four very simple mending techniques: exterior patches, interior patches, slow stitches, darning, and weaving. In addition, the book addresses the way mending leads to a more mindful relationship to fashion and to overall well-being.

A treasure trove of scientific fact and visual explanation, this worldwide illustrated guide to cephalopods offers a comprehensive review of these fascinating and mysterious underwater invertebrates--from the lone hunting of the octopus, to the social squid, and the prismatic skin signaling of the cuttlefish. Octopus, Squid, and Cuttlefish reveals the evolution, anatomy, life history, behaviors, and relationships of these spellbinding animals. Their existence proves that intelligence can develop in very different ways.

SING A SONG OF SEASONS: A NATURE POEM EACH DAY OF THE YEAR

This lavishly illustrated collection contains nature poems written by William Shakespeare, Emily Dickinson, John Updike, Langston Hughes, and many others, making it an ideal book for children to share at the beginning or the end of the day.

THE STORY OF BASEBALL: IN 100 PHOTOGRAPHS

BY THE EDITORS OF SPORTS ILLUSTRATED

Through 100 Evocative, often stunning photographs, as well as the stories that accompany them, Sports Illustrated visits the great arc of baseball, America's past time. From the dawn of the professional era, through the days of Babe Ruth, the westward expansion and the thrilling championships of today, baseball's rich and remarkable history is here. Unmatched storytelling is in high form in a book that renders exquisite anecdotes, and explores baseball's cultural heritage and uniquely American character, all in unforgettable style.

THE TALES OF BEEDLE THE BARD: THE ILLUSTRATED EDITION

The Tales of Beedle the Bard contains five richly imaginative stories of adventure, cunning, heartache, and, of course, magic. They are to the wizarding community what the tales of the Brothers Grimm are to Muggle families.This lush new illustrated edition has been translated from the ancient runes by Hermione Granger and is presented here with extensive commentary by Albus Dumbledore.

For every sale of this book, Scholastic will donate 15% of the suggested retail price to Lumos, an international nonprofit organization founded by J.K. Rowling that works globally to end the institutionalization of children.

The ultimate knitting reference, from the world's most recognized knitting magazine, gets a thorough update! It features revised and fresh material throughout, 65 additional pages, and more than 1,600 photos and hand-drawn step-by-step illustrations.With comprehensive chapters on lace and cabling, and information on knitters' tools, correcting errors, garment care, and more, it provides a masterly understanding of every stage of knitting.

WRITERS: THEIR LIVES AND WORKS

Introduced with a stunning portrait of each featured novelist, playwright, or poet, biographical entries trace the friendships, loves, and rivalries that inspired each individual and influenced their work, revealing insights into the larger-than-life characters, plots, and evocative settings that they created. Each entry explains how the person's writing developed during their lifetime, and sets it in context, conveying a powerful sense of the place and the period of history in which they lived.