IN CONVERSATION WITH MEG WAITE CLAYTON 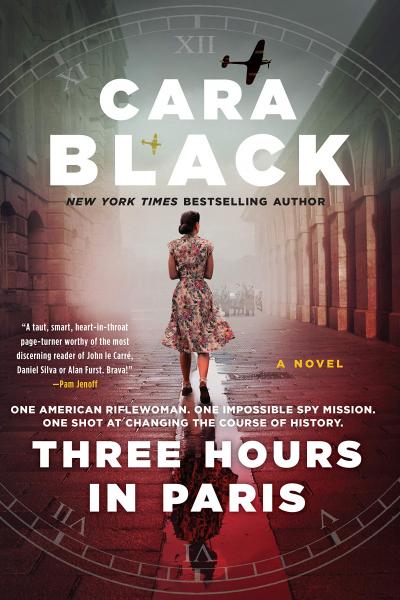 We are excited for our next virtual author event on Thursday, May 14th at 6PM with Cara Black, the author of the best-selling Aimee Leduc series; a long-time favorite of Bookshop West Portal. Cara will be joined by Meg Waite Clayton to read from and discuss Cara's new spy thriller, "Three Hours in Paris", a masterful pulse-pounding stand-alone novel in which she reimagines history in Occupation-era France.  In June 1940, when Paris fell to the Nazis, Hitler spent a total of three hours in The City of Light-- abruptly leaving, never to return. To this day, no one knows why. In the book, Kate Rees, a young American markswoman, has been recruited by British intelligence to drop into Paris with a dangerous assignment: assassinate the Fuhrer.  When Kate misses her mark and the plan unravels, she is on the run for her life---all the time wrestling with the suspicion that the whole operation was a set-up.

Please join us, Cara, author Meg Waite Clayton, and your fellow readers on CrowdCast, a virtual event platform. If you have never used CrowdCast before, you will be asked to sign in with your email and be sent a link to the event! Please allow time for the sign-in process prior to the start time of the event.  Autographed copies are available for purchase with free delivery to addresses in San Francisco, Daly City and Pacifica.

Please register for the event on CrowdCast here.

About Three Hours in Paris:

In June of 1940, when Paris fell to the Nazis, Hitler spent a total of three hours in the City of Light--abruptly leaving, never to return. To this day, no one knows why.

Kate Rees, a young American markswoman, has been recruited by British intelligence to drop into Paris with a dangerous assignment: assassinate the Führer. Wrecked by grief after a Luftwaffe bombing killed her husband and infant daughter, she is armed with a rifle, a vendetta, and a fierce resolve. But other than rushed and rudimentary instruction, she has no formal spy training. Thrust into the red-hot center of the war, a country girl from rural Oregon finds herself holding the fate of the world in her hands. When Kate misses her mark and the plan unravels, Kate is on the run for her life--all the time wrestling with the suspicion that the whole operation was a set-up.

Cara Black, doyenne of the Parisian crime novel, is at her best as she brings Occupation-era France to vivid life in this gripping story about one young woman with the temerity--and drive--to take on Hitler himself.

CARA BLACK is the author of nineteen books in the New York Times bestselling Aimée Leduc series. She has received multiple nominations for the Anthony and Macavity Awards, and her books have been translated into German, Norwegian, Japanese, French, Spanish, Italian, and Hebrew. She lives in San Francisco with her husband and son and visits Paris frequently.

"Heart-racing . . . Three Hours in Paris isn't just any old formulaic 'Get out!' tale. It's mystery master Cara Black's first standalone novel, a spy story set during World War II in Occupied Paris. The premise is that an American female sharpshooter is parachuted into France to assassinate Adolf Hitler. Of course, she fails. Using wits alone, she must evade the Gestapo and make it back across the English Channel. Chances of success? Slim to none. Chances that you'll be able to put Black's thriller down once you've picked it up? Also slim to none."
--Maureen Corrigan, The Washington Post

"Beyond Black's encyclopedic knowledge of Paris, her deft interweaving of WWII history and spycraft with a relatable female protagonist puts Three Hours in Paris on par with other top thrillers about botched missions followed by harrowing escapes--such masterworks as Frederick Forsythe's The Day of the Jackal, Jack Higgins' The Eagle Has Landed and Tom Clancy's Patriot Games."
--Paula Woods, The Los Angeles Times

"Ms. Black (also the author of a long-running series of detective novels featuring Parisian investigator Aimée Leduc) excels at setting vivid scenes, creating lively characters and maintaining pulse-elevating suspense. Three Hours in Paris, with its timetable structure and its hunt for a covert operative, recalls such comparable works as Frederick Forsyth's The Day of the Jackal and Ken Follett's Eye of the Needle."
--Tom Nolan, The Wall Street Journal

"As the author of 19 murder mysteries set in Paris, Black knows the city's hidden squares and winding alleys. The wartime city and its grim undercurrent of fear are evocatively portrayed . . . Three Hours in Paris is reminiscent of Alan Furst at his best."
--Financial Times

"An evocative depiction of wartime Paris and a lead you can't help rooting for . . . If you're seeking old-fashioned escapism, this has it in spades."
--The Times (UK)

"In Three Hours in Paris, Cara Black brings her masterful knowledge of the city and its people to the Second World War and an imagined failed attempt on the life of Adolf Hitler by a female American sniper that leaves her fate and that of the war effort very much hanging in the balance. The result is a taut, smart, heart-in-throat page-turner worthy of the most discerning reader of John le Carré, Daniel Silva or Alan Furst--brava!"
--Pam Jenoff, New York Times bestselling author of The Lost Girls of Paris