$15.95
SKU: 9780764967276
Bill Martin (American, 1943–2008) was born in 1943 in the San Francisco Bay Area. With the backdrop of late-1960s and early-1970s idealistic counterculture, he was inspired to explore the landscapes of the natural world and those of the psyche; in doing so he became a central figure in the visionary art movement. Martin brought his passion for clarity and detail to bear in paintings expressing a heightened awareness of flora and fauna. His work illuminated the archetypes of nature and, in many instances, those of the human condition.

Martin received his BFA and MFA degrees from the San Francisco Art Institute, where he later taught. His paintings have been exhibited in galleries and museums around the world, including the Museum of Modern Art and the Guggenheim in New York, the Fine Arts Museums of San Francisco, and the Musée d’Art moderne de la Ville de Paris, among others. He is the author of Paintings 1969–1979 (Harmony, 1979), The Joy of Drawing (Watson-Guptill, 1993), and Lost Legends(Pomegranate, 1995). 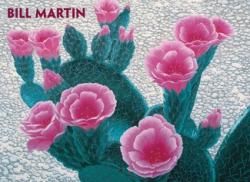