$15.95
SKU: 9780764968525
A native of Tucumcari, New Mexico, Kate Krasin (1943–2010) began her formal art training at the University of Texas at Austin and later studied under renowned painter and printmaker Elmer Schooley at New Mexico Highlands University. Following graduate studies at Kansas State University, she returned to New Mexico and settled in Santa Fe. Inspired by Japanese printmaking traditions, Krasin began making silkscreen prints in 1977, rendering the West's monumental landscapes on an intimate, human scale and creating exquisite studies of the region's native plants and flowers. Her work is found in many private and public collections, including those of the Roswell Museum and Art Center, the Albuquerque Museum of Art and History, the New Mexico State Capitol, and the New Mexico Museum of Art, Santa Fe. 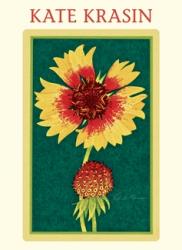