Early critics dismissed Claude Monet’s paintings as hasty sketches. But in fact Monet set himself a remarkably difficult task, and the evidence testifies that he succeeded brilliantly.

Monet (1840–1926) was devoted to the pursuit and capture of light—or rather, of its effects on sky, land, and water. Painting quickly to get the “impression” on canvas before the sunlight’s angle shifted too much, he produced work characterized by flickering brushstrokes, indistinct forms, and a truthful record of what he had seen before him at a particular time on a certain day.

Monet achieved his elusive goal by taking several canvases into the field and transferring his attention from one to another version of the same subject as the day proceeded and the light changed. He stalked haystacks, followed by his children pushing wheelbarrows piled with canvases and easels. The superb landscapes reproduced in this collection reveal the honesty of Monet’s vision and the amazing grace of his hand.

Twenty assorted 5 x 7” blank notecards (5 each of 4 styles) with envelopes in a decorative box.  Includes: Meadow at Giverny, 1886 Meadow with Poplars, 1875 Meadow With Haystacks, 1885 and Poppy Field In a Hollow Near Giverny, 1885 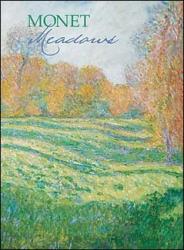